Following equity market weakness in January, February saw a strong recovery buoyed by expectations that US economic data will rebound in coming months as the effect of the extreme winter weather abates. Also the measured tones of new US Federal Reserve chair, Janet Yellen offered near term monetary policy clarity to markets. Yellen strongly reiterated the policy position of a steady reduction in US bond buying conditional on continued steady economic improvement led by the labour market while separately emphasising that core interest rate policy is to remain highly accommodative well into 2015 to underpin the recovery. Developed equity markets rose between 4% and 5% in February and in local currency terms are largely back into positive territory since the beginning of 2014.

The Euro was strong against the US Dollar and Sterling reversing the January trend. This was driven by weakness in US economic data and Asian central bank buying Euro based fixed income assets. 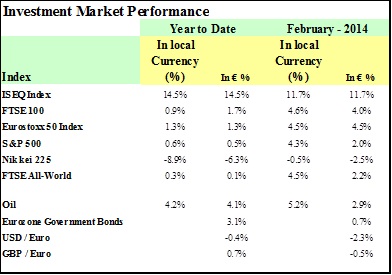 Economic data continued its recent weakness in the US with Quarter 4 GDP, January manufacturing activity and employment data all weaker and missing estimates. Housing and consumer confidence data was mixed in February while retail sales were weak. This was undoubtedly affected by a continuation of very cold weather but was in stark contrast with equity market positivity in February.

Within the Eurozone data was largely weak but for Germany where business confidence and retail sales surprised positively and PMI manufacturing registered 54.7 signalling solid expansion. 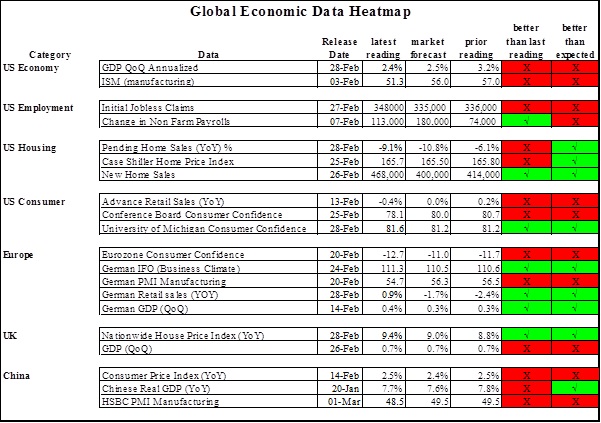 Ukraine – Geopolitical tensions to add volatility in the short term

Political and military tensions escalated in the last week as Russian forces already stationed in Crimea surrounded military instillations. Ukraine has been a battleground between the surrounding empires for several hundred years given its fertile lands and strategic east west location. Khrushchev, emphasising Ukrainian and Russian cooperation transferred Crimea to Ukraine in 1954. On the collapse of the Soviet Union in 1991 Ukraine gained independence for the first time. Crimea sought independence also but eventually agreed to remain part of the Ukraine. Over the last 20 years Russian influence in Crimea has remained strong and their intentions over its control have always been clear with almost 80% of its population ethnic Russian.

Our view on current tensions is that war is possible but not likely. It would be inconceivable that Russia would cede key access to the Black Sea and strategic access to the Mediterranean and the Middle East without conflict and as a largely Russian autonomous republic already, the west and the Ukraine may have to accept their strong influence in Crimea. As tension ease we could see a rebound in markets relatively quickly. However heading into next Winter, it will be interesting to see how Russia uses is significant Gas Supply leverage into the Ukraine and onwards to central and western Europe. Supply disruptions in the late 2000’s caused energy price spikes in Europe. This is a risk for markets with Germany likely to reassess its energy policy and its previous demotion of nuclear power generation.

Irish Bonds have continued to perform in February with spreads over German bonds continuing to narrow. While we continue to expect Irish yields to contract towards funding rates offered by soft Eurozone core issuers such as Belgium over the next six months, the scope for additional capital gains as yields converge is reducing.

Given the limited scope for further capital gain on Irish bonds into the future, Portuguese debt offers similar characteristics to Irish debt 1 year ago but unlike Spain and Italy, its relatively small, nimble economy and its more pragmatic politics offers a better prospect of yield compression through a successful bail out exit scheduled for May 2014 and credit rating upgrades.

Over the last three years Portugal has undertaken a comprehensive restructuring of its economy focusing on fiscal adjustment to restore budgetary balance while driving reforms to improve international competitiveness and adapt an export led growth model while encouraging longer term domestic economic activity through removing bureaucracy and encouraging entrepreneurship. Signs of its success are evident in Portugal’s first current account surplus in 2013 for several decades, domestic demand expansion in Q2 and Q3 of 2013, unemployment reducing from its 17% peak and sharp improvements in its positioning on international competitiveness and business league tables.

Portugal has successfully raised funds totalling over €6bn on the market in May 2013 and January 2014 with a good geographic spread of interest from international asset managers with some restricted by Portugal’s non-investment grade status (rating is similar to Irelands pre its upgrade in January). Risks for Portuguese debt centre on the fact that while the country remains fully funded into 2015 it is required to raise 7% of GBP on average over the next few years beyond this year. Also while commitment to austerity remains strong, legal risks to reform posed by the constitutional court ability to hear grievances and the requirement to save €3.2bn in this years budget from public sector wage bills and a realignment of public sector pension benefits with those of the private sector will likely raise political tensions. Furthermore, talk of a precautionary credit line which Ireland avoided has been raised in recent months but this may be a positive in the short term as it smoothens the transition to full market access into 2015.

Agricultural commodity prices have traded weaker over the last 12 months as bumper 2013 harvests globally but especially in the US boosted supplies with prices falling back to below long term food price inflation trends. However, in February food commodity prices in aggregate jumped almost 10% driven by lower production expected than in 2013 on lower pricing expectations and prolonged cold weather in the US damaging winter crops. Also, Argentinian exports are expected to fall as currency devaluation (down almost 30% in the last 6 months against USD) lessens the value of its produce to local producers and demand for food commodities globally has been strong.

In recent days, Ukrainian tensions have added volatility to prices. Ukraine is the third largest grain producer globally and the largest Sunflower Oil producer while potential sanctions against Russia would affect their food supply to global markets. Should tensions in the region be prolonged, food prices will continue to increase.