Investment Markets were mixed in December with weakness in the US Dollar, Sterling and Yen versus the Euro eroding gains in share prices leaving the FTSE World Index up just 0.1%. It was, however, a very strong year for equities with international shares ending the year up 15% in Euro terms while the key US market ended the year in record high territory having added almost 30% in local currency terms. 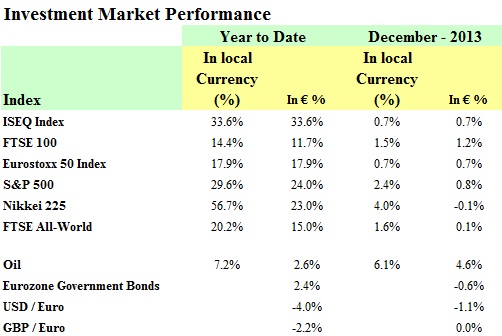 The US and Japanese stockmarkets were among the strongest performers internationally in 2013, with monetary printing by both country’s central banks providing significant support for asset values. An improving economic backdrop in the US fed through to modest top line revenue growth for companies which was bolstered by an increase in valuation multiples as investors saw better value in stocks over cash and bonds. 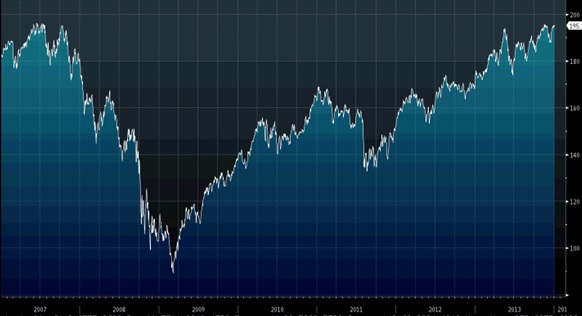 Bonds ended the year quite mixed as higher quality bonds such as those issued by Germany, Australia and the US ended the year lower while lower rated credits such as Italy, Spain and Ireland were considerably stronger. There was a significant jump in longer dated yields in the second Quarter as the US Federal Reserve first mooted the withdrawal of quantitative easing. The scale of quantitative easing in the other major currency zones saw the Euro make further gains against most currencies. The US Dollar ended the year 4% down against the common currency despite the relative strength of US economic data versus European indicators. 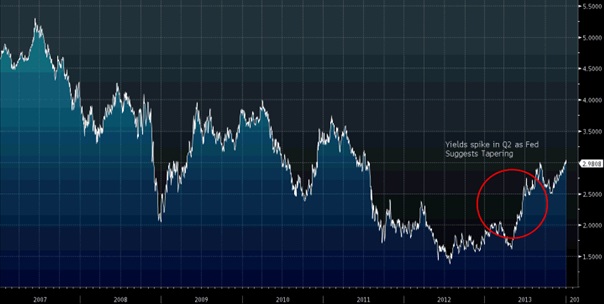 Commodities were mixed over the course of the year with agricultural commodities remaining near their recent lows following their decline from the 2012 spike. Metals rallied towards the end of the year having fallen sharply over the first quarter. Gold recorded its biggest annual decline since 1981, falling over 30% in US Dollar terms as investors shunned safe haven assets as the economic situation in Europe and the US became clearer.

2013 was an exceptionally strong year for investment markets with US stockmarket indices scaling new heights despite relatively anaemic economic growth both domestically and globally. Monetary policy (the determination by Central Banks of short term interest rates and the supply of money) was in 2013 the single most dominant factor driving investment behaviour in all asset markets including equities, bonds and currencies. This is unlikely to change in 2014 with the expected transition of policy away from the extraordinary measures adopted between 2008 and 2011 to a more normal environment likely to dominate investor sentiment and behaviour. We believe that this transition will take longer than equity markets currently anticipate and this supports a positive outlook for equities and commodities in the near term. The second half of 2013 saw some significant developments which would appear to have reduced the general background level of major macro-economic and geo-political risks which threaten markets and cause volatility further supporting investment sentiment. New threats have, however, emerged as they always do with increased military tensions in the East China Sea and around North Korea presenting new challenges.

The attempts by the Federal Reserve to communicate its intention to tailor the level of quantitative easing to the developing economic climate saw the word “taper” enter the financial vocabulary in 2013. Despite clear guidance from the Fed that quantitative easing will remain a flexible policy tool available to the Central Bank which may increase as well as decrease its use as the prevailing employment market conditions dictate, equity markets continue to see the development of quantitative easing as being entirely around the withdrawal of the policy. We believe that this view is premature given the risks to economic growth as interest rate policy changes.

Given the focus of markets on the US Federal Reserve we believe that a slower than expected withdrawal of monetary stimulus will see equity markets continue to outperform as low interest rates and bond yields force more and more money out of bonds and cash. The impact of quantitative easing on investment market performance over that last two years has been very significant with the 30% increase in the S&P 500 Index ($ terms) in 2013 tracking the 37% increase in the Fed’s balance sheet over the same period 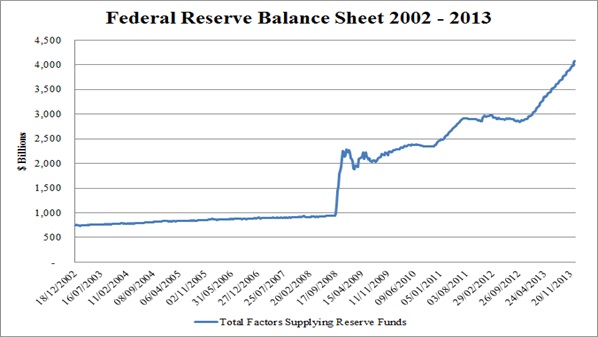 While we believe that the market is underestimating the length of time that the Fed will take to remove the exceptionally accommodative measures currently in place, we also believe that markets are overoptimistic regarding the impact of even moderately higher rates on the broader economy and in particular on consumer and investor sentiment. Consumer and sovereign indebtedness remain high and given the exceptionally low base from which rates are rising, even slight increases will have a significant impact on serviceability. Exceptionally low or even negative returns on safe haven assets such as short dated treasuries, money market funds or cash deposits have seen significant movements of funds by normally risk averse investors into higher yielding riskier assets such as junk bonds and equities. It is quite conceivable that even a modest increase in interest rates could see a stalling of this trend or even a reallocation of funds back to more secure assets. Investment strategy for 2014, therefore, requires a balance between taking advantage of further strength in riskier assets in the short term while being conscious that once monetary policy does start to tighten, the higher macro-economic risks and effect on investor behaviour could pose a threat to equities, property and other risky assets.

We believe that the strength in equity markets seen in 2013 will continue into 2014 as investors continue to seek returns and move funds out of bonds and cash. US economic strength relative to Europe and the current level of the US Dollar, in our view, justify the current valuation premium that US equities show over their European equivalents.

Despite a rise in longer dated bond yields in 2013, longer dated bonds only present value for money if deflation is the base case economic scenario. Outside of the Eurozone Central Banks are actively increasing the supply of money and here we see a deflationary scenario as being unlikely. Within the Eurozone fiscal policy is certainly deflationary, however, we believe that the ECB will ultimately have to pursue more unconventional approaches to maintain its targeted 2% inflation objective given the slowing in economic activity in the last two quarters. It is difficult therefore to be positive on the outlook for longer dated bonds over the coming two or three years.

Agricultural Commodities are our favoured sector here going into 2014. The slide in prices over the past year and a half has come against a backdrop of exceptionally benign climatic conditions in all of the major food growing regions. While weather events are by their nature unpredictable, it is hard to see the conditions of 2013 not being disrupted at some stage over the coming years offering an opportunity to repeat the exceptional gains exploited in 2012. 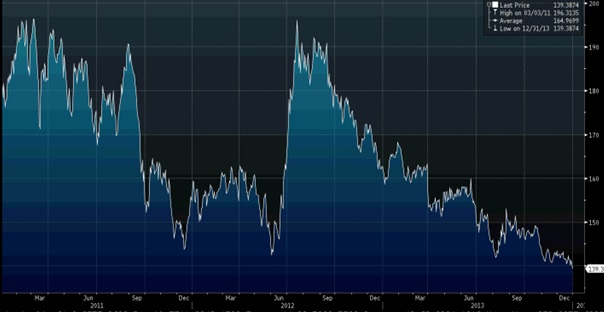 Important deals between the major western powers and Iran around the latter’s nuclear ambitions and between the Republicans and Democrats in the US on budgetary processes have largely eliminated two of the most significant threats that faced markets this time last year. The impact of the Iranian agreement on energy prices was modest given the importance of Iran in terms of easily accessible reserves and we would expect to see further pressure on oil prices as this supply gradually comes back on stream. The December accord reached between the two US political parties got surprisingly little press given the earlier attention on their repeated failure to reach agreement on an increase in the debt ceiling. A functioning US government is surely one of the most positive developments for investors going into the New Year and removes one of the more unpredictable threats facing markets over the last two years.

Recent history has taught us that the greatest risks facing investment portfolios are those which are least expected ahead of the event. Portfolio diversification is the only effective approach to address this type of risk. Going into 2014, however, it is useful to identify specific areas that we are currently looking at as potential banana skins for investment markets. The Eurozone remains a potential source of risk due to the continuing stresses resulting from austere fiscal policy and stagnant economic growth. Political uncertainty in Italy and exceptionally high levels of youth unemployment across the Eurozone have historically provided a rich breeding ground for economic and political extremism.

Tensions on the Korean peninsula and in the nearby East China Sea between China and Japan escalated in 2013. Bellicose posturing by both the Chinese and Japanese around the disputed Senkaku islands are increasingly limiting both parties ability to compromise without loss of face. Ultimately we believe that the chances of a major conflict is remote, however, the risk is that a minor incident escalates into something that neither side is planning for. North Korea is a more real threat, albeit much more containable from the perspective of investment markets given the country’s pariah status internationally and lack of international trade.