Markets have been quite volatile since the end of May with significant weakness across all major asset classes. Unusually, there has been a high level of correlation across asset classes with bonds, equities, commodities and real estate assets all falling. There appears to have been three main factors driving the deterioration in investor sentiment with the announcement by the US Federal Reserve that they were looking at “tapering” back their quantitative easing programme the initial catalyst for the weakness in asset prices. Weaker economic  data from China has also contributed to the declines, while investor profit taking following a strong year in most markets has also had a significant role to play. We have been assessing developments closely over the last three weeks and the following note outlines our thinking on the factors driving markets in recent weeks and our current ideas about portfolio strategy at this point in time.

Rising Bond Yields and their Impact  on Investment Markets

Bond Markets have fallen sharply over the last few weeks as investors reacted to the possibility of the ending of Quantitative Easing in the US and its impact on demand for longer dated Treasuries. Recent strengthening in US economic data and in particular housing and labour market data has allowed the Federal Reserve to openly discuss the possibility of tapering back quantitative easing into 2014. Bond investors are nervous that reduced buying of longer dated bonds by the Federal Reserve through their QE programme will cause the market to fall sharply and so have been selling US Treasuries and corporate bonds causing prices to fall and yields to rise. International bond markets have moved in tandem with the US with yields on German 10 year bonds rising over 0.6% over the last three weeks.

Unusually, equity and commodity markets have fallen with bonds, despite the fact that the withdrawal of quantitative easing is a confirmation of the Fed’s positive economic outlook and their belief that the recovery in the US economy is now self-sustaining. For equities and commodities this is clearly positive, however, equity investors have been un-nerved by the size of the movement in bond yields and its possible implications for companies and countries seeking to raise finance.

Historically, rising bond yields have tended to coincide with strength in equity markets as bonds fall on positive economic data which puts upward pressure on inflation and in turn on interest rates. A stronger economic backdrop supports commercial activity, demand for goods and services and ultimately corporate profitability which is all positive for share prices. Currently, however, bond investors and equity investors appear to be taking different and somewhat inconsistent positions on where things go from here. Firstly, the weakness in bond markets suggests that investors believe that the economic recovery is now robust enough for the Fed to withdraw stimulus permanently, and that interest rates will soon start increasing. While withdrawal of Quantitative Easing in itself removes some technical buying support for US bonds, the weakness in non US bonds also suggest that bond markets are looking more at a longer term change in the interest rate outlook. In Europe markets have even started to price in a possibility of an interest rate increase over the next 12 months, again presupposing a meaningful pick up in the weak Eurozone economy. 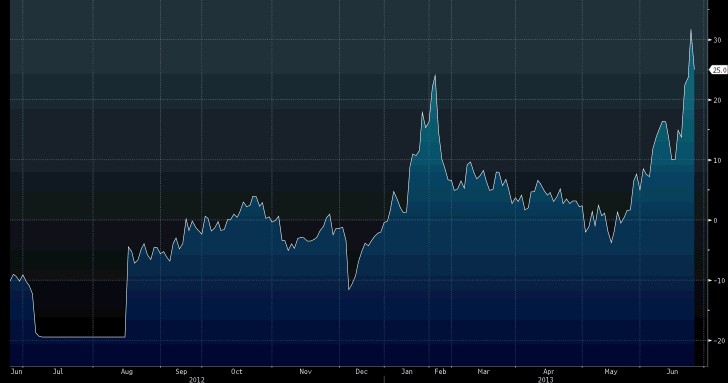 Equity investors appear to be taking a very different view as the sharp fall in stockmarkets suggests a significant threat to corporate profitability posed by the withdrawal of monetary stimulus. Equity markets appear to be concerned that: a/ stimulus is being withdrawn too aggressively and too soon; b/ the economic recovery in the US is not self-sustaining and will not survive without Quantitative Easing; c/ that the Fed will not be able to reverse course if there was slippage in economic data as monetary policy is tightened.

The question  as to the timing of the withdrawal of stimulus  is difficult to answer, however, our view is that the economic recovery remains quite fragile and historically recovery from recessions resulting from banking  crises tend to be very slow and early withdrawal of inflationary stimulus  is risky. The Federal Reserve has, however, made very clear that  the tapering back of quantitative easing is contingent  on the economic data  remaining strong and  that  the process  will take  place over a period of time (at least six months it appears). In terms of formulating our investment  outlook, the ability of the Federal Reserve to restart or increase quantitative easing should economic data start to slip is key. We are comforted here by the proactivity and  flexibility of US policy since the start of the financial  crisis  in 2008 and  the recent commentary on this issue from the Fed. We believe that  this removes a significant element of the “policy error” risk currently being weighed by stockmarkets.

Over recent weeks concern has grown that the positive trajectory in Chinese growth may be stalling as manufacturing data weakened and export growth appeared to drop sharply in May. Coupled with this is the growing realisation that markets cannot expect much in the way of monetary policy aid from the new Chinese regime as they appear intent, at least outwardly, on restructuring domestic credit markets where a so called “shadow banking” system using off-balance sheet lending is seen as fuelling a potential credit bubble.

Chinese Purchasing Manager Index Data in late June was much weaker than anticipated, the lowest reading since October 2012, and reaffirmed the contraction witnessed in May following 6 months of expansion. Poor export orders led the weakness, falling at the fastest rate since March 2009 while an increase in the stock of finished goods inventories and a fall-off in employment suggests genuine demand weakness and little prospect of a near term bounce back. 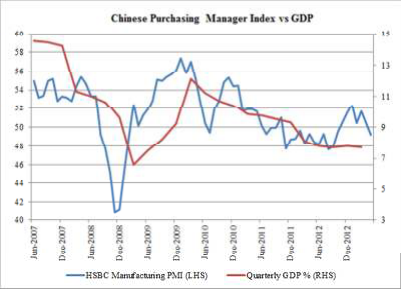 Historically, movements in the Manufacturing element of the Purchasing Managers Index has been a reasonable leading indicator for Chinese economic growth. The decline in the PMI in 2008 was swiftly followed by a sharp slowdown in GDP growth but significant state driven infrastructure spending and stimulus supported activity during 2009 and into 2010. The recent weakness takes place at a time when China is actively trying to curb leveraged investment by tightening lending restrictions. In the last two weeks China’s money markets have witnessed a liquidity squeeze with a spike in SHIBOR, the interbank lending rate, as the Chinese authorities pulled back liquidity in order to improve lending standards due to concerns over non-regulated lending to the construction sector. This has affected sentiment in the short term towards Chinese markets and economic growth with a sharp fall-off in Chinese equities witnessed over the last week from an already underperforming market year to date.

While the lack of reliable, comprehensive Chinese data makes it difficult to assess the true strength of the Chinese economy, recent manufacturing and export data  has been weak. The concentration of monetary and regulatory policy on improving lending standards and controlling lending by the “shadow”  banking sector poses further challenges in the short term for the Chinese economy, although  the policy measures are prudent when taking a longer term perspective. The Chinese government’s target of 7.5% growth for

2013 must now be called into question with many international investment  banks having revised Chinese growth to 7.4% over the last month  from its current level of 7.7%. We believe there is now a significant risk of Chinese growth undershooting these targets, although  in that instance it is likely that we would see some shifting of both monetary and fiscal policy to make sure the official growth target is achieved.

Investment markets have had an exceptionally strong performance since the low point reached during the financial crisis in 2009. Over the past eighteen months US markets have set new all-time high levels having fully recovered the declines of 2008 / 2009. This has coincided with further gains in bond prices with corporate bonds in particular reaching historic yields.

As seen from the below graph equities fallen sharply from their levels at the end of May, however, looking back at the longer term rally in markets since March 2009, we have seen much more severe bouts of profit taking / dips in investor confidence which have quickly been recovered. 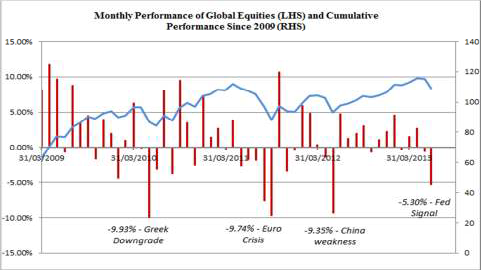 It is difficult to distinguish between profit taking activity and more significant and entrenched market weakness, but there are some factors we can look at to assess how much of the selling is driven by concerns of a larger scale pull-back. Heavy selling volumes and relatively stronger performance of safe haven assets such as gold, bonds and the US Dollar typically accompany large scale market sell offs, whereas investor profit is typically low in volume and not usually supportive of safe haven assets.

Volumes traded in stockmarkets tend to decline somewhat over the summer months as investment decisions and trading activity reduces due to summer holidays. This June has been no different and trading volumes have not increased to any meaningful extent with the falls in share prices again suggesting no significant panic selling of large volumes.

Bond market weakness has been the catalyst for the recent weakness in stockmarkets and the fall in share prices has been accompanied by further weakness in safe haven Treasuries. Gold has also been weak and does not appear to have benefitted from the weakness in other asset classes suggesting that there is no significant switching out of risky assets into safe haven investments.

Overall, the evidence we have looked at suggests that  profit taking  is a significant factor in the weakness of the last few weeks with volumes traded and the absence of any significant buying of safe haven assets suggesting that equity investors overall are comfortable with their holdings. Technical profit taking bouts over the last four years have seen significant  monthly  drops in share prices only to be quickly recovered over the following months, and this pattern may well repeat itself here.

Overall, the recent weakness in markets is a function  of the three key issues: Profit Taking  by investors after a strong year; volatility  in bond  markets and  concerns  of Chinese  Manufacturing. Profit taking reflects  temporary trading patterns and  will likely reverse as volumes pick up towards the end of the summer. Concerns regarding bond yields will also likely reduce, with the focus of equity markets shifting to the more benign economic environment or alternatively the restarting of quantitative easing. China is a more difficult issue to address at this stage and we would be concerned that markets have not adequately allowed for the risk of a hard landing for the Chinese economy over the next twelve months.  In the near term, however, we believe that  the stronger economic data  in the US which is encouraging  the Fed to tighten policy will support risky assets such as equities and commodities and we see these asset classes as recovering quickly.

We also recommending holding bond exposures at present as recent sharp moves in bond yields are set to stabilise  and  possibly reverse somewhat.  However,  post  this  short term stabilisation  we would look at either hedging  portfolios  against  the  risk of further rises  in  bond  yields  or alternatively selling  any positions.